“Focused Inbox” on Outlook Makes it Easier to Manage Emails and Helps You Focus More Efficiently!

Microsoft first released ‘Focused Inbox‘ as one of the key features of Outlook last year. It helps users focus more efficiently on important emails and keeps other ordinary emails on separate tabs.

The feature has now being rolled out to almost all platforms including Mac, Windows, iOS, Android, and even Web-based Outlook.com. All 365 mailboxes in the first release program can now access their “focused emails” and make their emailing habits more productive and focused.

If you are an older user of Outlook client, you might notice the similarity between this and the “clutter” feature of Outlook that offered earlier. It basically has no major differences except that “focused inbox” is a better, more refined version of clutter that runs on the same ‘machine learned algorithm.’

The previous users of “clutter” can opt-in to this new feature from the in-app prompt in Outlook. These users will no longer be receiving anything on their ‘clutter’ folder, instead all those non-important messages will send to ‘other‘ folder.

Important thing to notice here is that Outlook hasn’t completely remove the clutter feature, but it will do so once the ‘Focused Inbox’ has completely rolled out for everyone. 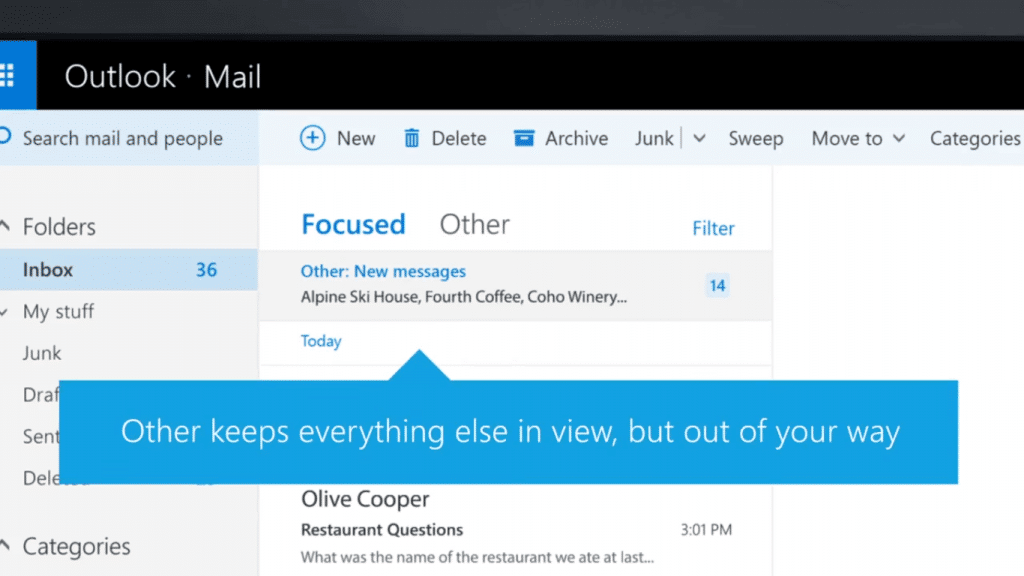 How does Focused Inbox works?

It’s very important in this day and age of productivity and distractions that you focus your attention on important stuff. That’s what Outlook has always striven for; Focused Inbox is another important addition to that that will significantly make things better.

When you open Outlook, you can see two tabs under your inbox – Focused and Other. This is done through smart machine learned algorithms that determines the importance of your emails through various factors. It understands your emailing habits and people you communicate with most often. You can even manually move any email from ‘Focused’ to ‘Other’ or vice-versa. That will make the algorithms even more precise for future.

You can also turn off the “Focused Inbox” feature anytime you want.